The Big Fight Is On For Tomorrow

Ever since this powerful bull run started (thanks to Captain Ben), except for the last two days, SPX never closed below its 13 EMA (daily).  It has tagged it 7 times since 9/1 and bounced off it quickly.  There have been some minor selling every time SPX closed above its 13 EMA+2.5% V. Shift.  The sharpest sell off happened in three consecutive days after 9/20 when SPX close above its 13 EMA+2.5% V. Shift for the second time since the start of the rally.

On 11/4 and 11/5, SPX closed again above its 13 EMA+2.5% V. Shift.  Right on cue, selling started the next day.  Except for one up day (11/10), selling has continued into the close of today.  SPX has now two consecutive days of closing below its 13 EMA.  That is not good for bulls.  As of now, the likelihood of more selling is higher, but not high enough for me to give up on this rally and open short positions.

Tomorrow will be interesting.  If bulls are to continue their march upward, they'd better get SPX to close nicely above 1200, something like 1211.  If bears want to take over, they'd better push it down to at least 1191.  If nobody wins the fight tomorrow, then we have to wait for another fight on Wednesday.

I'm in cash (moved to cash on 11/10).  I do have small long positions in a few stocks that I opened today for my short term position trading. 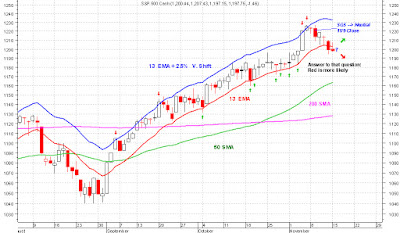 SGS is Neutral and RTS is in cash.

Disclaimer: The views expressed are provided for information purposes only and should not be construed in any way as investment advice or recommendation.  Furthermore, the opinions expressed may change without notice
on 8:43:00 PM
Email ThisBlogThis!Share to TwitterShare to FacebookShare to Pinterest