To Raise Or Not To Raise 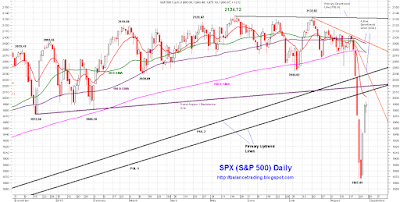 A combination of panic selling and forced margin liquidation hit the market on Monday (at the open) and again on Tuesday (near the close).  SPX sold off hard twice down to 1867, putting in place a 12.5% correction from its May all time high (2134).  There were reports that indices would have dropped substantially lower on Monday and Tuesday had not been for the US Plunge Protection Team intervening.

By week's end, SPX managed to cut its losses considerably and closed only 11 points shy of 2000. 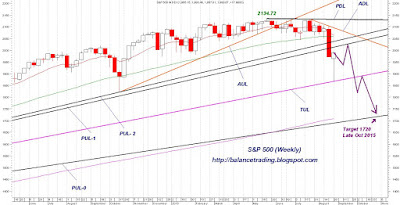 Going forward, the uncertainty of the Fed's decision regarding interest rates is going to push indices lower and higher for the next couple of weeks.  Once FOMC decision is announced (very likely an increase of 0.25%), indices very likely sell off hard until late October when SPX tests its PUL-0 around 1720.

In the panic selling of last Monday, I covered all short positions in my long term portfolio. I am in cash now and waiting for opportunities to open new short positions.  My plan is to do three shorts sells in SPY and QQQ (equal $ amount).  I will probably do my first short sell sometime on Monday.

Disclaimer: The views expressed are provided for information purposes only and should not be construed in any way as investment advice or recommendation.  Furthermore, the opinions expressed may change without notice.
on 10:45:00 AM
Email ThisBlogThis!Share to TwitterShare to FacebookShare to Pinterest

Another Black Monday? Where Is The Fed? 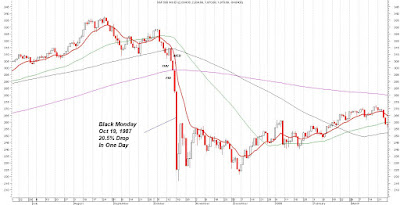 The week before the crash on October 19, 1987 (Black Monday), like this past week, SPX had three bad days in a row and Friday was the worst day of the week.  The following Monday indices crashed.   SPX dropped 20.5% on that day and continued its decline the next day by another 4% when the Fed intervened in the middle of trading day and offered unlimited liquidity to everyone who needed it and a major financial crisis was averted. 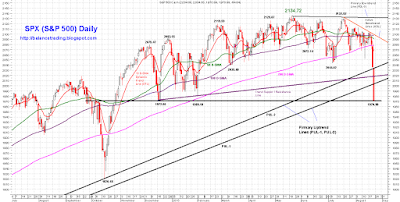 Chances are high that indices continue their decline unless the Fed intervenes between now and Monday morning before the open.  What the Fed can do is limited since interest rates are at zero and announcing another round of QE would be out the question.  It would not surprise me if the Fed announces an indefinite postponement of any future interest rate hikes.

Technically, indices are severely oversold now and we should see a bounce this coming week.  At the same time, a severely oversold condition is the trigger for a crash, another 3% to 5% decline.  It's like pulling on a low hanging branch.  It bends and bends, and then it just snaps and falls down.

"I'm still waiting to do my third and fourth short sells.  Chances are good that SPX tests quadruple  resistance (ADL, DTL, 50 and 100 D-SMA's) around 2095 on Monday or Tuesday.   My plan is to do my 3rd short sell as SPX tests that resistance zone.  After the test, should SPX sells off and closes below its TUL (thick pink), I would do my fourth and final short sell."

Well, I didn't do that, I wish I had, LOL.  Going forward, I will be looking to see what the futures do Sunday night and Monday morning.  Should the Fed intervene in one form or another, my plan is to cover shorts early Monday AM.  Otherwise, chances are good that indices either crash on Monday (another 3% to 5% decline) or continue their decline after a "dead cat bounce".

The Bull, The Bear And The Ugly 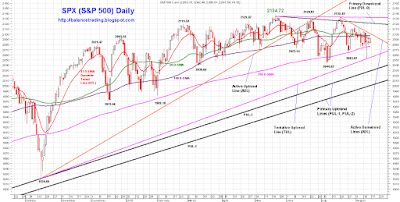 On Wednesday last week, SPX penetrated its 200 D-SMA by over 1%, but still managed to close safely above it.  Although, that type of intraday reversal is bullish, but at the same time that deep of a penetration of an important support signals a high likelihood of retest of that support within a few trading days.  For bulls, SPX needs to continue trading above its 200 D-SMA or at least above its PUL's for the next couple of months, then continuing going higher on the back of good economic data, earnings and forecast. 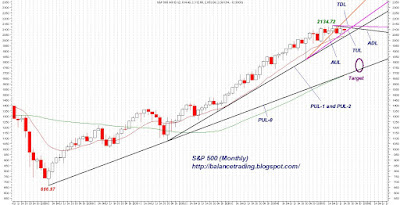 The likelihood a Fed rate hike in September is high.  If the US economy starts to grow at a 3% or higher rate, the Fed would continue to raise rates.  That means the era of "free money" is over for all, including Big Money, hedge funds, companies and the consumer.   The game that went on for over six years, namely central banks' agents using debt papers they bought on behalf of central banks (the Fed, ECB and BOJ) as margin to buy equities, is over.  It would also mean the end of massive stock buy back programs by companies, Apple for example.

Rising interest rates is a game changer and there are consequences including a bull market correction, probably around 15% to 20% by late this year.  Should the US economy achieve and sustain a 3% to 4% growth for a few quarters, as the Fed hopes, then chances are good that indices to resume their uptrend and reach new high's in 2016. 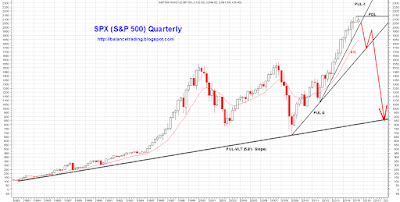 What if, despite all of that QE, the US economy grows at an anemic rate, or worse yet it actually shrinks (negative GDP)?  Then things would get pretty ugly and chances would be good that SPX sells off to its historical rate of return, around 6%.

I'm still waiting to do my third and fourth short sells.  Chances are good that SPX tests quadruple  resistance (ADL, DTL, 50 and 100 D-SMA's) around 2095 on Monday or Tuesday.   My plan is to do my 3rd short sell as SPX tests that resistance zone.  After the test, should SPX sells off and closes below its TUL (thick pink), I would do my fourth and final short sell.

Another Selling Opportunity Is Coming Up 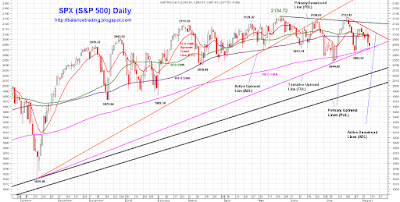 The sell off past week was ugly and damaging to the bull case.  After dropping around 40 points for the week, SPX finally found support at its 200 D-SMA on Friday.  Despite only a 0.25% intraday penetration of 200 D-MA, there was no evidence of any dip buying. That is not a good sign for bulls.  Nevertheless, SPX managed to close about 0.25% above its 200 D-SMA, mostly likely due to short term short covering. 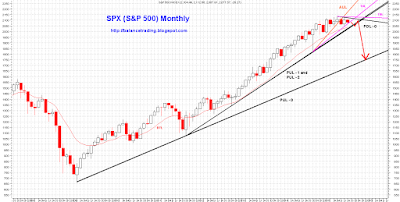 All three leading indices (DJI, DJT and RUT) are now trading below their 200 D-SMA.  NAZ and SPX are both trading below their 50 D-SMA's.  Chances are excellent that SPX and NAZ would follow the leaders and crash through their 200 D-SMA soon, probably within the next 5 to 10 trading days.  For SPX, a daily close below its 200 D-SMA would signal a high likelihood of testing of its PUL's (PUL-2 and PUL-1) around 2040 and 2005.  Those two PUL's (thick black) have shouldered the uptrend since October of 2011. A solid close below those lines (a close below SPX 2000) would cause a major sell off and very likely test of PUL-0 around SPX 1750.

Per my plan, I did my 2nd short sell immediately after a daily close below 100 D-SMA (2095) on Wednesday.  Going forward, short term indices are oversold and chances are good that SPX rallies on Monday and possibly Tuesday to back test the immediate resistance zone between 2090 and 2095.  My plan is to do my 3rd short sell as SPX back tests that resistance zone.  After the back test, should SPX sells off and closes below its TUL (thick pink), I would do my fourth and final short sell. 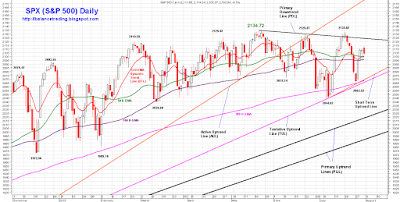 The rally last week was very likely a typical counter trend rally which is common as a 10%-15% bull market correction commences.

Disclaimer: The views expressed are provided for information purposes only and should not be construed in any way as investment advice or recommendation.  Furthermore, the opinions expressed may change without notice.
on 5:48:00 PM
Email ThisBlogThis!Share to TwitterShare to FacebookShare to Pinterest
Newer Posts Older Posts Home
Subscribe to: Posts (Atom)