A Critical Week Is Ahead

On Monday at the open, RTS sells BBT and buys  UNG in its place. 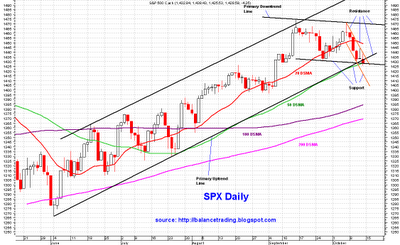 Indices took a shellacking last week as uncertainty about the election crept back in.  Market is more comfortable with Obama than Romney.   To Market, Romney Administration would mean a new Fed Chairman, end of QE, possibly a new war in ME, and government austerity measures that would shrink growth to less than 1/% or even worse.

Indices are oversold.  On Friday, SPX broke through and closed below its Primary Uptrend Line and found support at its 50 DSMA.  There is a good chance that we see SPX rallying next week to test resistance at its 20 DSMA around 1440.   Rally would continue if Obama does well in the debate next week and starts pulling away from Romney in swing states poles.  Market is still predicting an Obama victory.