A Change In Trend ... From Bullish To Neutral

RTS Long Term Current and Past Portfolios
Planning to close all long positions, please see below

Indices Long Term Current and Past Portfolios
Planning to close all long positions, please see below

RTS-OS Portfolio and Trades
No Trades 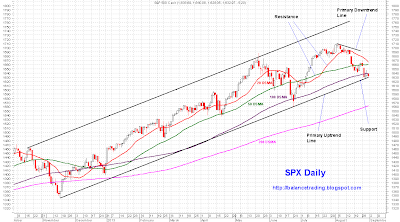 I follow 5 major indices (NAZ, DJI, RUT, DJT and SPX) closely.  DJI broke its Primary Uptrend Line (PUL) on 8/19 and has been trading below it ever since.  On Friday, DJT broke its PUL and closed below it.  SPX is also trading near its PUL, tested it last Wednesday and again on Friday.   Chances are good that, after a short covering rally on Tuesday, we see SPX to come back and decisively close below its PUL.  That would make 3 out of 5 major indices trading below their PUL's and technically signaling a change in the trend from bullish to neutral.

As of this writing, futures are up by about 1%.  I think chances are good that we SPX rallies tomorrow and tries to back test its 50 D-SMA in upper 1650's.  My plan is to close longs at upper 1640's to lower 1650's, but definitely by the close no matter what.

I have no idea what is gong on with Syria or why we want to get involved and support a bunch of Osama loving fanatics.  For now, Obama has pushed the issue to the Congress which means nothing is going to be decided anytime soon.  Financial markets hate these type of uncertainty and usually drift lower when things are left up in the air.

Reps will surely use Syria to hammer Obama; and when it comes to "debt ceiling", Reps are going to play hardball.  That could tank the bond market, push interest rates significantly higher and cause a major sell off in equity markets.   That's perfectly OK with Reps, because the only way they can win in 2014 / 2016 elections is to have our economy in a deep recession.

Disclaimer: The views expressed are provided for information purposes only and should not be construed in any way as investment advice or recommendation.  Furthermore, the opinions expressed may change N without notice.
on 7:52:00 AM
Email ThisBlogThis!Share to TwitterShare to FacebookShare to Pinterest
Newer Post Older Post Home