To Taper Or Not To Taper? 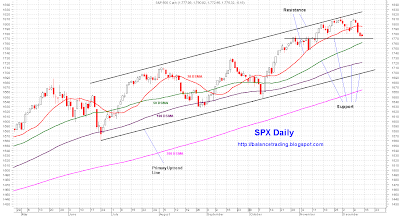 One think we can confidently say about the Fed (especially about Bernanke) is that the Fed learns its lessons well.  When QE-1 ended back in the Spring of 2010, the Fed sat on its hands and watched markets sell off until in a panic they announced QE-2 in late August of 2010.  Again when QE-2 ended in the Spring of 2011, the Fed hesitated to continue QE and indices suffered.  In late Fall of 2011, finally, the Fed announced and put to work its "no end date" QE which has propelled markets higher and higher ever since.

The Fed has learned well from its past mistakes; therefore, I doubt very much if the Fed does more than a token taper.   I'm hoping for a sell off early this week to give me a chance to open long positions.  My plan is to do my first buy (50% RTS and 50% Indices) of 4 buys hopefully tomorrow or on Tuesday.

Disclaimer: The views expressed are provided for information purposes only and should not be construed in any way as investment advice or recommendation.  Furthermore, the opinions expressed may change N without notice.
on 4:11:00 PM
Email ThisBlogThis!Share to TwitterShare to FacebookShare to Pinterest
Newer Post Older Post Home