Egypt is the Unkown for Market 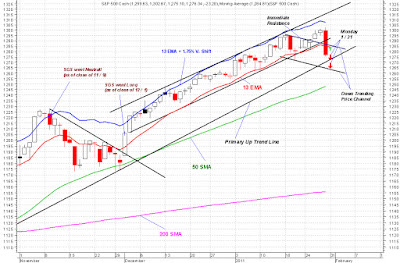 From what I've read (btw, http://www.juancole.com/ is an excellent source for ME news and analysis in my opinion), it's highly unlikely for unrest to spread to ME major oil producing countries.  Also so far, unrest and protests had very little impact on shipping in Suez Canal.  Once that becomes evident, Market  would rally from the oversold condition that it's in now.  That could happen as early as tomorrow  and SPX could rally to back test its 13D EMA around mid 1280's.

There is also a good chance for further selling if things get completely out of control in Egypt.  In that case, SPX very likely breaks through the Primary Uptrend Line, currently around 1270, and sells off to the lower channel line of the Down Trending Price Channel, around 1260.

Disclaimer: The views expressed are provided for information purposes only and should not be construed in any way as investment advice or recommendation.  Furthermore, the opinions expressed may change without notice.
on 12:27:00 PM
Email ThisBlogThis!Share to TwitterShare to FacebookShare to Pinterest
Newer Post Older Post Home