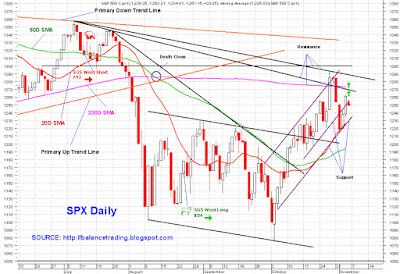 October powerful rally peaked on 10/27 with NAZ, DJI, SPX nicely trading above their 200 D-SMA's and DJT, RUT testing theirs.  Then Market sold off and all five major indices closed below their 200 D-SMA's and traded there for a few days.  What's happening now is a retest of Market's 200 D-SMA (all five major indices collectively) and it is critical that Market closes above its 200 D-SMA and continues to trade there.  NAZ and DJI closed above their 200 D-SMA's yesterday.  We need to see the remaining three flow suit by early or mid next week (next Friday at the latest) or the bull run would be in trouble.  I am optimistic and believe we see that within the next couple of trading days (even as early as today).
Face Book
Twitter
opader@gmail.com

Disclaimer: The views expressed are provided for information purposes only and should not be construed in any way as investment advice or recommendation.  Furthermore, the opinions expressed may change without notice.
on 5:18:00 AM
Email ThisBlogThis!Share to TwitterShare to FacebookShare to Pinterest
Newer Post Older Post Home