Big Money Is Setting Up A Big Bear Trap 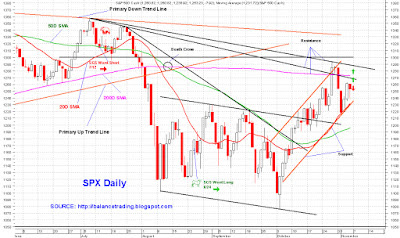 Big Money wants to rally indices much higher between now and EOY.  The bull leg that started on Oct 4 has reached the 200 D-SMA resistance.  It's critical that indices cut through that resistance soon and start trading above it.  Once that happens, not only we get massive short covering by doom and gloom crowd, but also fund managers would be forced into opening long positions.
I believe Big Money went to work shortly after close on Friday setting up bear traps to get doom and gloomers add to their shorts.  Big Money boys at ZeroHedge were busy this weekend spreading nonsense ("CME Goes To Collateral DefCon 1.." and "Israel is about to lunch nuclear missiles attack on Iran") all over the web.  With bear traps all loaded now, all Big Money has to do is rally cash indices on Monday via their futures and force a short squeeze which would propel all five major indices above their 200 D-SMA.

Disclaimer: The views expressed are provided for information purposes only and should not be construed in any way as investment advice or recommendation.  Furthermore, the opinions expressed may change without notice.
on 11:37:00 AM
Email ThisBlogThis!Share to TwitterShare to FacebookShare to Pinterest
Newer Post Older Post Home