SGS Market Timer Is NEUTRAL ... A Top Is Very Likely In

I did not open any short positions last week simply because indices did not offer an entry point (i.e. a day with a lower low and a lower high).  Indices, especially NAZ and NDX, continued to go higher on the back of a couple of large cap issues (GOOG, NFLX, ....) reporting better than expected earnings and short covering due to agreements regarding Greece and Iran.

Where Are We Going Now? 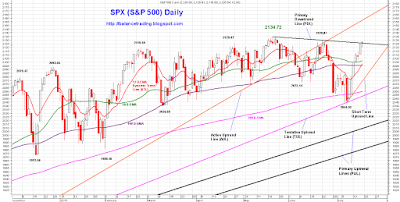 SPX finally ran into resistance at its PDL on Friday and stopped there.  Chances are good that SPX starts to sell off this coming week and goes down to test all important psychological 2100 level where also its 20, 50 and 100 D-SMA happen to coincide.  A daily close below 2100 would be problematic for SPX.  It would signal a sell off to test its short term uptrend line around 2090.

If SPX continues to sell off and gets into 2050 area, things would begin to get very interesting as shown on the weekly chart below. 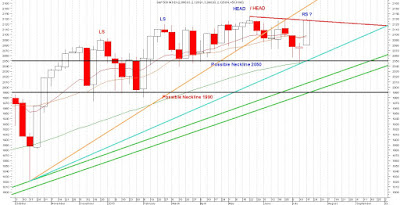 What I described above is the more likely bearish case of where Market is headed over the course of next couple of months.  A big powerful rally this coming week in all major indices and a close by SPX above its all time high (2135), however, would negate that bearish case.  That's not likely, but no one knows for sure.

Disclaimer: The views expressed are provided for information purposes only and should not be construed in any way as investment advice or recommendation.  Furthermore, the opinions expressed may change without notice.
on 2:15:00 PM
Email ThisBlogThis!Share to TwitterShare to FacebookShare to Pinterest
Newer Post Older Post Home