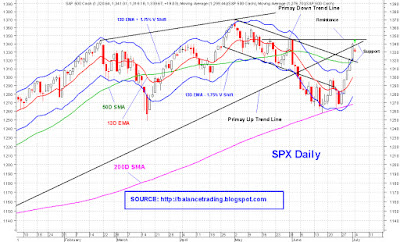 Big Money never sold his long positions as he dragged the indices down from their May 2 highs to June 16 lows by aggressively selling their future contracts.  Since June lows, Big Money has been adding more longs and will continue to do so because he expects excellent earnings reports and positive forecasts by companies.  I expect the rally to continue until late July and new highs for US indices are very likely sometime this month. I'm planning to scale into long positions again by buying dips.

One possible spoiler, however, could be what's happening with the debt ceiling.   For now, Reps are threatening "government shutdown" and "government defaulting on its debt obligations". That's an empty threat because they know well the consequences of a government shut down and default could be another financial meltdown, but I think that threat becomes very real if things in Minnesota, where the state government has been shutdown for about a week now, go Reps' way.  If Reps in Minnesota get the public behind them and force more spending cuts on the poor and tax breaks for the rich, GOP in DC would be more willing to do the same at the federal level.  And if they let the government default on its debt obligations, we would see VIX testing its 2008 highs.

Disclaimer: The views expressed are provided for information purposes only and should not be construed in any way as investment advice or recommendation.  Furthermore, the opinions expressed may change without notice.
on 3:22:00 PM
Email ThisBlogThis!Share to TwitterShare to FacebookShare to Pinterest
Newer Post Older Post Home