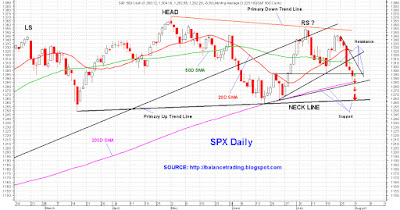 The stalemate in the US Congress over the debt ceiling (a totally manufactured crisis) is far from over.  Even when they manage to pass a bill to increase the debt ceiling, I wouldn't expect anything other than a one day relief rally in indices.

Chances are good that indices continue to bleed lower for foreseeable future, at least until Captain Ben starts flying his helicopter again (QE-III). Even then, I wouldn't expect to see the same reaction in indices as we saw from late Aug 2010 to mid Feb 2011 in response to QE-II.  The market response to QE-III would be very muted imo.

We're in a bear market and indices will continue trading lower.  I think as soon as the debt ceiling issue is put to rest, we would start getting signals from the Fed that they're "standing ready with more quantitative easing" in order to prevent a crash in markets as more and more signs that economy headed toward another recession (double dip) emerge.  Nothing short of  a major overhaul of entitlement programs and tax code would turn this bear market into a bull market. What are the chances of such an overhaul anytime soon?  Zero to None.

Disclaimer: The views expressed are provided for information purposes only and should not be construed in any way as investment advice or recommendation.  Furthermore, the opinions expressed may change without notice.
on 1:13:00 PM
Email ThisBlogThis!Share to TwitterShare to FacebookShare to Pinterest
Newer Post Older Post Home