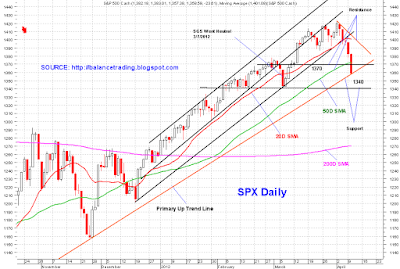 A review of major indices:
After five down days, indices found strong supports to close on today.  It's highly likely that SPX rallies from its oversold condition tomorrow or the next day to back test its 50 D-SMA around 1370.
I believe there is more selling coming our way after a possible relief rally.  Most large cap high fliers (AAPL, PCLN, SBUX, FAST, FFIV, ROST, HD, etc.) and high volume index trackers (QQQ, SPY, DIA, IWM, etc.) put in relatively long solid red candles with higher volumes.  Big Money is stealthily unloading long positions because he knows he can secure those positions at a lower cost later.
I expect SPX to test its lows of last March (around 1340) sometime this week.  I'm still in cash and watching.  I would definitely post here should I decide to open long or short positions.
Face Book
Twitter
opader@gmail.com

Disclaimer: The views expressed are provided for information purposes only and should not be construed in any way as investment advice or recommendation.  Furthermore, the opinions expressed may change without notice.
on 7:47:00 PM
Email ThisBlogThis!Share to TwitterShare to FacebookShare to Pinterest
Newer Post Older Post Home