No Market For Old Bears

Opening Following positions at open on Monday 4/30/2012 and closing on Friday 5/4 at close or if a goal of 2.5% portfolio gain is reached during the week. 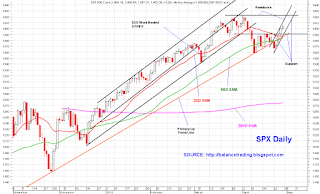 SPX bounced of support at 1360 level last week and is rallying to challenge its recent multi-year high of 1422, but before getting there a sell off to test its Primary Uptrend Line (PUL)  at or around 1390 is very likely.