YoYo Is Back In The Second Half

The Fed not raising on Thursday was a surprise to me.  It certainly spooked equity markets across the globe as market participants are wondering now what it is that the Fed is looking at and the Fed is scared of.  That worry and uncertainty, combined with the dim earnings outlook, is going to dominate the second half of the correction game.


Where Are We Heading Longer Term (Weeks)? 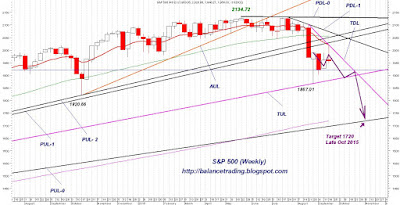 Failing to even put a dent on overhead resistance last Thursday means that SPX is on its way to test the August low (1867).  If that test fails, then chances are good that SPX would continue its selling to test PUL-0 somewhere between 1750 to 1700 depending how quickly and viciously it sells off.  The quicker and more vicious SPX sells off, the deeper it would go.  My guess is that SPX would find PUL-0 by late October around 1720. 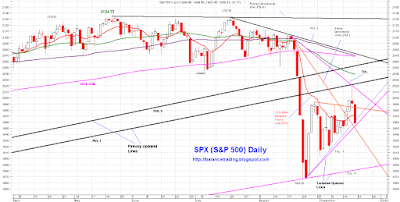 Shorter term, it's going to be YoYo continuing its torture of Retail, but more viciously in the second half of the ongoing correction.  YoYo's masters are positioned short now and they want the correction to continue so they can cover their shorts with a nice profit.  Using Yoyo, they are pushing Retail to sell as they target the largest and the most vulnerable part of Retail which is the self-directed 401K.

The sell off that started on Thursday afternoon would very likely continue on Monday and Tuesday as SPX sells off to test support zone 1920 to 1910.  Should that support zone fail, SPX would sell more to test its TUL-0 and its August 24 low.

I'm still planning to do my third and final short sell as SPX sells and breaks through its TUL's (TUL-1 and TUL-0 in pink).

Disclaimer: The views expressed are provided for information purposes only and should not be construed in any way as investment advice or recommendation.  Furthermore, the opinions expressed may change without notice.
on 8:39:00 AM
Email ThisBlogThis!Share to TwitterShare to FacebookShare to Pinterest
Newer Post Older Post Home