As of close of Friday, SPX has corrected about 10% form its all time high.  SPX is very likely on its way to correct another 10% between now and late October.  It took nearly four months for SPX to complete its initial 10% correction, but the second 10% correction will be likely done in about four to five weeks as the pace of selling accelerates significantly.

The current sell off is a hybrid of two past sell off’s, the 1998 (“Long-Term Capital”) sell off and the 2011 (“End of QE-2”) sell off.  In both cases, sell off did not end until the Fed intervened.   In mid October of 1998, Greenspan lowered both interest rates that the Fed controls by 50 basis points in the middle of trading day.  In late October of 2011, Bernanke announced QE-3 (Operation Twist, “QE Infinity”).

So, the question is: What is going to save the market this time? The Fed is hoping that a 3% or higher GPD, good  earnings / outlook by companies, good employment data and generally positive signs of economic growth, at least in our country, would save the market.  I hope they are right, because otherwise, I have to conclude that there could be significantly more selling ahead and SPX could possibly go down to 780 to test its historical and natural 6% uptrend line. 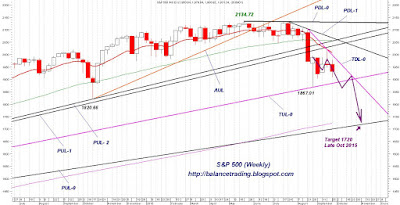 My guess still is that SPX would find PUL-0 by late October around 1720. 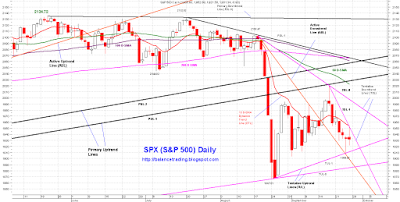 Shorter term, it's going to get pretty ugly as relentless torturing of Retail continues.  Chances are good now that SPX sells through its TUL-0 to test its August lows (1867) later in the week.  A weekly close below 1867 would signal a high likelihood of more selling in the next few weeks until SPX finds a bottom at or near its PUL-0.

I'm planing to do my final short sell shortly after the open on Monday.

Disclaimer: The views expressed are provided for information purposes only and should not be construed in any way as investment advice or recommendation.  Furthermore, the opinions expressed may change without notice.
on 7:27:00 PM
Email ThisBlogThis!Share to TwitterShare to FacebookShare to Pinterest
Newer Post Older Post Home