Algorithm "YoYo" Is In Control Now

BM is by far the biggest player and more and less he controls the entire global financial market.  BM and Hedgies are in a constant state of war in which each side is trying to take away the other side's money (more on that later), but everyday they both go after the easy money and that's Retail.

In order to get Retail's money, they employ various techniques ranging from misinformation spread by their talking heads in our mainstream media to subjecting Retail to relentless financial torture via their algorithms and programs.

Near tops they have their talking heads  encourage everyone to get in long  ("buy buy buy", "Apple should be your core holding", "SP500 will be trading at 2500 by year's end", ...).  As BM starts to unload its long positions, their talking heads spin every dip as a buying opportunity ("my wife says this is a buying opportunity and I trust my wife").  Once BM and Hedgies have unloaded most of their long holdings and have opened their short positions, then at that point,  their talking heads tell everyone to get out ("I don't know, but this is ugly and might get uglier"), pushing market more down.  For the Retail that does not watch or listen to their talking heads, BM employs programs and algorithms to torture that Retail financially until remaining Retail gives up and gets out.

One of BM's nasty algorithms that he unleashes half way through a correction is an algorithm that uses index future contracts to push cash indices to extreme levels of high and low on daily basis.  I have named that algorithm "YoYo".  YoYo's job is to make it extremely painful for Retail to stay in and forces him to give up and exit.  YoYo is active now and will remain active until a bottom is made.

Where Are We Heading Longer Term (Weeks to Months)? 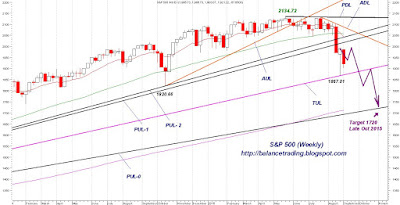 Job data that was released on Friday was much better than expected which has made it almost certain that the Fed will raise 0.25% in September.  That expected rate hike is being priced in now, but the focus is shifted to "the Fed statement and their future actions"  until FOMC meeting on 9/16 and 9/17.  I expect YoYo to stay in control until then and volatility (torturing of Retail) to continue.

Bottom line is that the golden age of free money is over. Now reality is setting in and there are consequences, 7% is already done, about 13% to go between now and mid to late October.  If the Fed is right and our economy continues to grow at a healthy rate of 3% to 4%, then the bull market of 2009 would continue.  If the Fed is wrong, GDP shrinks, earnings / forecasts disappoint, then we would be going to hell to visit SPX 666 (March 2009 low).

Where Are We Heading Shorter Term (Days to Weeks)? 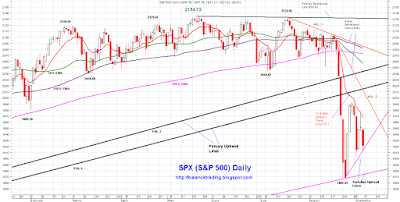 Shorter term, indices are oversold and chances are good that they rally to test important technical and psychological resistance (DTL, ADL-2 and SPX 2000, good points to dump longs).  Should SPX sells off and breaks through its TUL's (thick pink), then it would take a big leg down toward its objective of 20% correction around lower 1700's.

Per my plan I did my first short sell of three on Monday (DIA, QQQ and SPY, equal $ amounts).  I will do my 2nd short sell as SPX comes up to test important resistance this coming week.  Should SPX sells off and breaks through its TUL's, then I would very likely do my 2nd and 3rd short sells.

Disclaimer: The views expressed are provided for information purposes only and should not be construed in any way as investment advice or recommendation.  Furthermore, the opinions expressed may change without notice.
on 7:30:00 AM
Email ThisBlogThis!Share to TwitterShare to FacebookShare to Pinterest
Newer Post Older Post Home