Based on the recent economic data, there is no growth or at best there is anemic growth in the US economy.  Therefore, it's reasonable to assume that SPX would very likely remain range bound between 1800 to 2200 for the next 6 to 12 months or as longs as ZIRP continues.  If the economy starts heading into a recession, then the Fed would start another around of QE and indices would probably rally up again.

That is the Fed's game plan as it became quite evident based on the minutes of FOMC September meeting.  The Fed has no intention of ending ZRIP, not 2015 and probably not anytime in 2016.  "Free Money Party" goes on and on.  Enjoy 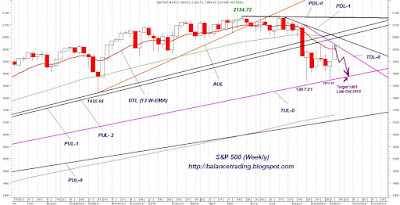 SPX is overbought and chances are good that it would sell off over the course of next two weeks to test its new TUL-0 around 1885 as disappointing earnings reports pour in. 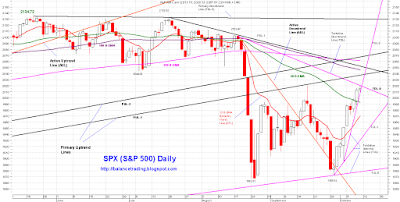 Last Wednesday SPX tested its 50 D-SMA and on Thursday and Friday closed well above it.  That is bullish and cannot be ignored.   SGS Market Timer also turned from SHORT to NEUTRAL as of close of last Thursday. Chances are good that SPX sells off early this coming week to back test its 50 D-SMA around 1990 and very likely its DTL around 1980.

With SGS going from SHORT to NEUTRAL, my plan is to close my short positions.  I am planning to cover one half of my short positions as SPX sells off to back test its 50 D-SMA and test its DTL.   For the second half, I am going to wait to see if SPX sells further to test its TUL-0 around 1880 to cover the 2nd half.  If SPX rallies higher, however, I'm going to cover the 2nd half should SPX takes out its recent high of 2020.

Disclaimer: The views expressed are provided for information purposes only and should not be construed in any way as investment advice or recommendation.  Furthermore, the opinions expressed may change without notice.
on 5:06:00 PM
Email ThisBlogThis!Share to TwitterShare to FacebookShare to Pinterest
Newer Post Older Post Home