Last week started well for bears.  SPX continued its sell off at an accelerated rate on Monday, then corrected for the next three days with a typical counter trend weak rally.  By Friday indices were ready to take a big leg down.  Everything got off to a good start for bears, but about an hour into trading something strange happened.  It seemed that a force intervened and started buying index futures and ignited a massive short covering that lasted into the close.  It would not surprise me to learn in a few days that PPT intervened on Friday as they intervened on Monday August 24 when SPX plummeted to 1867 shortly after the open.

The Fed Zero Interest Rate Policy (ZIRP) has created two bubbles over the course of last 6 years.  A big bubble in equities and giant bubble in bonds, especially in junk bonds.  Some estimate the junk bond bubble to be over 1.5 trillion dollars.  Higher interest rates and the probability of them going even higher would cause the bond bubble to burst.  That's why the Fed is reluctant to hike because nobody, including the Fed, really knows what those bubbles popping would do to equities and the economy.   This is similar to 2007 when nobody knew what was about to happen when the bubble in mortgaged back securities popped.  Now we know what happened, it was the crash of 2008 and the worst recession since the great depression.
For the next few weeks, it is a win-win to be short in equities.  If GDP for Q3 is 3% or higher, then the Fed has no choice other than raising interest rates which would cause a sell off in bonds and a short term (weeks) sell off in equities.   If Q3 GDP is 2% or lower, which is very likely, then despite the Fed not raising interest rates, the equities would sell off because of a slowing down economy and hence lower earnings for companies. 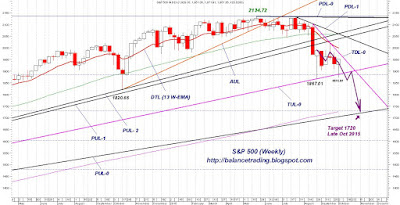 The rally that started on Tuesday last week is or was very likely a typical bear market rally, sharp in size and short in duration. My guess still is that SPX would find PUL-0 by late October around 1720. 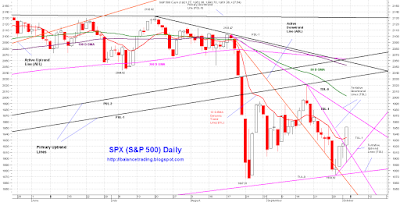 Shorter term, it's going to get pretty ugly again, possibly starting on Monday.  Chances are good that SPX breaks through its TUL-1 by mid week and then continues its sell off to break through its TUL-0 to test its August 24 low (1867).

Per my plan I did my third and final short sell last Monday.

Disclaimer: The views expressed are provided for information purposes only and should not be construed in any way as investment advice or recommendation.  Furthermore, the opinions expressed may change without notice.
on 10:55:00 AM
Email ThisBlogThis!Share to TwitterShare to FacebookShare to Pinterest
Newer Post Older Post Home