I have no plan to reactivate my Facebook page or to start a new one.  I added "comments" section (located near the bottom of each post) to my blog where comments, questions and discussions will be posted.

You can subscribe to my blog using your email to get new post notifications and replies for your comments or questions.
If you like this blog and find it useful, then please help me get more traffic to it.  Please spread the word. Thank You.

On Wednesday last week, the Fed published one of its most dovish statement since Janet Yellen has become the chair.  In its statement, the Fed effectively ruled out any interest hikes in the foreseeable future and hence painted itself into a corner.   If they hike interest rates in the US, then the US dollar would appreciate significantly which would cause oil prices to fall and hence increasing a massive default of energy backed debt.  If they don't hike, as seems to be their plan for now, they would suppress growth in European and Asian economies.  It seems that the Fed thinks that the US economy is vulnerable and it could go into a recession later this year or early next year.

I think the Fed is going to be watching 2016 first quarter earnings and forecast in early April and hope that the US economy is accelerating its anemic growth.  If earnings and forecast are disappointing, then stocks would suffer significantly which would signal a coming recession in late 2016 to early 2017. 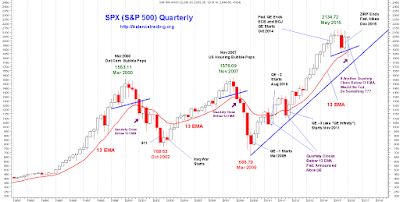 Longer term (weeks to months) picture has not changed.   Unless companies report spectacular earnings and forecast, indices would suffer until the Fed announces another round of QE. 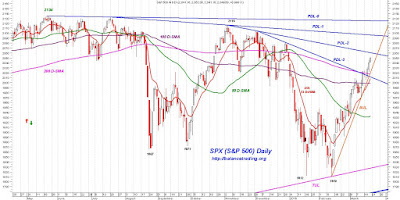 Shorter term, SPX is at extreme overbought level.  Chances are good that SPX sells off this coming week to back test its recent resistance levels such its 200 and 100 D-SMA.

No change. I've have done two short sells of SPY and QQQ.  I am still waiting to see how SPX behaves as it sells off to back test important resistance around 2020 to 2000.

Disclaimer: The views expressed are provided for informational  purposes only and should not be construed in any way as investment advice or recommendation.  Furthermore, the opinions expressed may change without notice.

on 6:54:00 PM
Email ThisBlogThis!Share to TwitterShare to FacebookShare to Pinterest