An Agreement On "Fiscal Cliff" In 2012 Is Not Likely 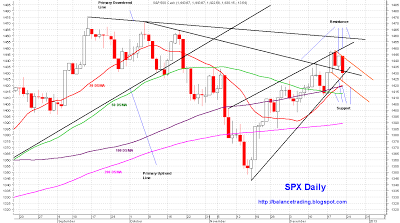 After rallying on Monday and Tuesday, SPX sold off and formed a new down trending price channel (orange).  SPX very likely would continue trading in that channel so long as there is no resolution to the budget negotiation in DC.  Chances of Reps and Dems reaching an agreement before Dec 31 deadline is not good imo.

Possible outcomes are:
Last week, per my plan I did my first of four in both RTS and RTS-Div Portfolios.  My plan is to see if an agreement is reached next week and at that point do another buy.  Otherwise, I am going to wait to do more buys in early 2013.

Disclaimer: The views expressed are provided for information purposes only and should not be construed in any way as investment advice or recommendation.  Furthermore, the opinions expressed may change without notice.
on 2:25:00 PM
Email ThisBlogThis!Share to TwitterShare to FacebookShare to Pinterest
Newer Post Older Post Home