Market Is Predicting A Budget Agreement 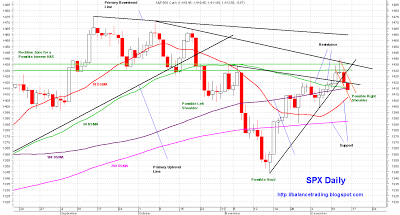 Despite selling in indices last week, market breadth and number of new highs actually improved signaling that any future selling in indices would be limited.  Also, selling last week put in the right shoulder of a possible inverse H&S price formation for most major indices.

I except a very choppy trading week ahead, but chances are good now that indices eventually rally later in the week.  That means Market is predicting that a budget agreement will be reached by end of his coming week or at least significant progress is made toward an agreement.

Disclaimer: The views expressed are provided for information purposes only and should not be construed in any way as investment advice or recommendation.  Furthermore, the opinions expressed may change without notice.
on 12:19:00 AM
Email ThisBlogThis!Share to TwitterShare to FacebookShare to Pinterest
Newer Post Older Post Home