Here You Go Again Big Money and Why Not

This weekend Mike Burk, in his weekly update, wrote the following as to what is happening in equity markets:

"In the early years of this century housing was the only game going.  The Fed kept the game going by keeping interest rates too low for too long.  When housing finally collapsed of its own weight it took the financial system with it.  Since the collapse of 2008 - 2009 health care and energy have been the big winners and the Fed has kept that game going by keeping rates too low for too long.  The financial system is again in jeopardy."

It is not surprising to see the financial system in jeopardy because Big Money (BM) is at it again.  BM caused the 2008 financial collapse by committing outright fraud and pocketing a few trillion dollars while millions of people lost their jobs, homes and retirement savings.  Tax payers were eventually forced to bail out the financial system and save it from a total meltdown.

BM was never punished by Obama's DOJ.  There were a few congressional hearings in 2009 and at the end BM's companies (i.e. shareholders) paid a few billion dollars in fines.  No one was prosecuted and no one served time.

This is analogous to punishing a bank robber for a heist by making him pay only a couple of thousand dollars in fines while letting him keep his few hundred million dollar loot. Without any meaningful punishment for his crimes, that bank robber would continue robbing banks.

Similarly in BM's mind, why not do it all over again and walk away with billions.  If he is caught, no big deal, he just pays a few millions in fines, but keeps his loot.  Why not indeed. 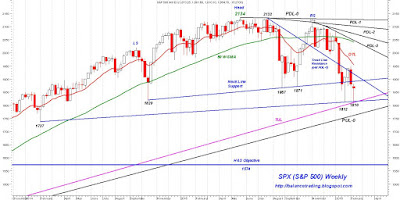 SPX sold off and tested recent the low (1812) on Friday.  Whether or not that test was successful and selling was exhausted remain to be seen.  I still expect SPX to reach its H&S Top objective (upper 1500's) sometime in late March to early April. 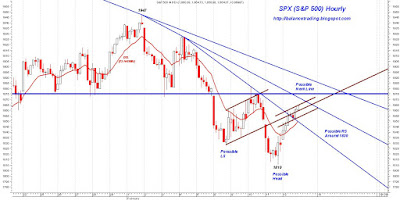 Shorter term, chances are good that SPX rallies on Monday to test upper 1870's which could be a possible neck line for a H&S Bottom price formation.  Selling should resume after that as SPX breaks out of its bear flag, shown on its hourly chart above, to the downside.  I expect SPX to go lower to test support around 1830, possibly forming he right shoulder of that H&S Bottom price formation.

Per my plan I did my 2nd short sale of 3 in SPY and QQQ on Tuesday.  Depending what price action is seen around 1830, I might cover all short positions or keep them open.  Should SPX sell off, take out 1810 and close below it, I would do my third and final short sell in SPY and QQQ.

Disclaimer: The views expressed are provided for information purposes only and should not be construed in any way as investment advice or recommendation.  Furthermore, the opinions expressed may change without notice.
on 11:53:00 AM
Email ThisBlogThis!Share to TwitterShare to FacebookShare to Pinterest
Newer Post Older Post Home